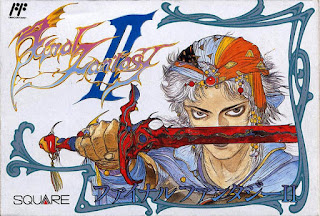 Needless to say, what resulted was an endless source of confusion regarding Square's retconning as they made their Western debuts via PlayStation, Game Boy Advance and DS incarnations, be they altered ports or elaborate remakes. And yet, in the case of Final Fantasy II, I cannot help but feel this was the correct decision: whereas Final Fantasy IV is a series masterpiece, II is certainly its retro nadir, filled with antagonistic design decisions that smother any goodwill it sought to bring. While hardly the worst JRPG, said decisions render it a slog of mediocrity as opposed to the prestigious, glorified adventure established from the very first game. 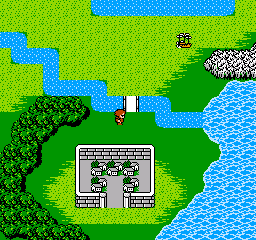 You'd be forgiven for thinking otherwise, especially considering the aesthetic improvements that wow us from the get-go. With the game taking place within the fires of war, it's not an uncommon sight to spot airships zipping about the overworld skies. The infamous "NPCs block your path" problem persists, but we're too busy observing how they're assigned appropriately respective walking speeds -- the young and limber prance about, whereas the elderly inch along -- to notice. Battle animations are snappier than ever, rendering what was already an impressive set-piece from the first game as slow and clunky.

Alas, further acquaintance with the combat quickly reveals its crippling flaws, all owing to that pesky re-imagining typical of these black sheep sequels. As opposed to the traditional level-up system, Final Fantasy II's brand of experimentation revolves around raising each party member's respective stats and attributes, all which rise upon use. For instance, equipping one party member with an axe and repeatedly using it in battle will strengthen that character's Axe level, whereas focusing on Fire magic will not merely increase one's intelligence but also their Fire magic level.

On paper, this may seem like a variance upon the original game's use of classes, but what ensues is something far more tedious: leveling up each respective skill takes up to 50-100 uses, and such a gargantuan criteria means you're constantly grinding so the party's not instantly outpaced by the enemy. Not that the original Final Fantasy didn't have its fair share of grinding as well -- we are talking about 8-bit JRPGs here -- but we rest assured knowing everything becomes stronger in a simple level-up; here, we're left to manually increase everything from individual Weapon Skills, Attack, HP, Agility/Evade, Vitality, Intelligence (Black Magic) and Soul (White Magic), leaving us no choice but to take absurdly drastic measures in ensuring we're not left behind. 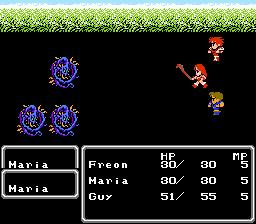 Take, say, vitality: our defense only increases upon being hit, so this leads to the common-sense option of hitting yourself. As beautifully illustrated in Hardcore Gaming 101's review, it's a reliable tactic to repeatedly whack yourself with a weapon so as to raise your vitality and HP. Suspension of disbelief ain't go nothing on the sheer nonsense going on here, with our team multi-tasking in slaying monsters and chopping themselves with swords. As they say: no pain, no gain -- maybe Firion and the gang are just really into masochism?  (And hey, be careful of the sea-saw effect: raising your attack means you lower your intelligence, so think twice before attacking yourself as a mage)

And that's only the tip of the iceberg -- items are only restricted to one use for battle, and they have to be equipped on the actual party members; meaning, if you're affected by petrification or blindness, tough, you have to wait until after the battle to cure it. It's a baffling change, meant only to artificially raise the difficulty as opposed to any sensible balance change, rendering this design decision Final Fantasy II's biggest barrier to entry. And don't think you can just run away, either: that's decided by your Agility and Evasion stat, and with that being decided by dodging --  something's that completely luck of the draw -- good luck on fleeing by the game's end.

Combine this all with the patently obtuse progression of NES RPGs, and you're in for something of a frustrating ride. Granted, it's nothing a walkthrough can't handle, but even trademark hindrances in the form of "memorize every cryptic clue from NPCs" don't have a patch on Final Fantasy II deliberately screwing you over. Look no further than its collection of dungeons and their elaborate dead-ends: doors leading to nothing but empty, boxed-in rooms, often punishing you with scripted enemy encounters that, surprise, you can't run from. In addition to punishing us for our mistakes, Final Fantasy II punishes us for our curiosity, and nothing is a bigger deterrent to our engagement than that.

It becomes a gigantic plodding mess of demoralizing tedium, made all the worse by blatantly disingenuous difficulty. The above Gigas enemy is perhaps the most infuriating standard enemy I've encountered in any JRPG, equipped with an insane amount of defense and squashing your party with practical OHKOs. With our impaired fleeing abilities, encountering twice of these things were my most dreaded encounters -- given my option of play was via fan translation, my heart goes out to all the Japanese players who didn't have access to save states.

Still, it's not all bad: we have something resembling an active story, for once. Being on the NES, it's not anything particularly deep, but actual characters and motivations exist as opposed to blank slates and paper-thin premises. Not that rebellions rising against warped dictatorships are anything new, but Firion's uprising goes to places the original never dared to attempt, be it hints of romance or an ever-fluctuating party, with members coming and going via newly-founded roles or death. This is all helped along by the fan translation, which is of standard quality. (Cid yelling swears being the only particular highlight -- while I'd ordinarily dismiss this as a crass move, they're not used in abundance as in the fan translations of old, and admittedly it's a novelty having swears implemented within an NES game) 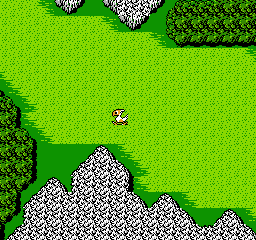 Let us also not forget this is the Final Fantasy that introduced two key recurring elements: the adorable Chocobos and scruffy men by the name of Cid. While the latter holds a far more prominent role, we're more taken by the avian Chocobos -- true, their flying us about lacks the convenience of later titles (they're largely limited to one area, and they soar back to their forest home upon disembarking), their iconic mambo theme instantly etches itself into our hearts, compelling us to pointlessly glide around the surrounding desert to make it last as long as possible. Luckily for us, Chocobos are unfettered in later entries, but we'll elaborate on their future endeavors as they come.

Speaking of music, Nobuo Uematsu returns for another dignified score. While not as memorable as the first game -- the battle theme isn't as great as the first, but in truth, I feel similarly for the rest of classic FF, so it wouldn't be fair to drag Final Fantasy II for that -- it hardly mirrors the mediocrity s of the game itself. The "Overture" prologue still succeeds in whisking us away to a mythical fable, but it's the imposing Overworld Theme that defines Final Fantasy II's goal: this is the not the light-hearted adventure introduced prior, but one instead of war, loss and sorrow.

However, I confess my favorite tunes aren't even Uematsu compositions -- yet another famous Final Fantasy staple initiates here in the form of classical reprisals, be it Johann Strauss II's "Kaiser-Walzer" (a celebratory castle waltz) and Pyotr Ilyich Tchaikovsky's "Swan Lake" (the theme of Princess Hilda). The former's probably my favorite in that its respective dance abruptly comes and goes, but more to the point, their presence demonstrates Final Fantasy's emulation of prestige -- one it'd quickly abandon by reserving said classics to dancer requests, but that they work here at all speaks to the strength of its scenario.

And yet, these are accomplishments I can hardly even begin to appreciate. Indeed, Final Fantasy II is a game that's trying: it wants to tell a story. It wants to awe with its technological advancements. It wants to innovate. But alas, like its black sheep contemporaries, it forgets not to innovate for the sake of innovating, and we are left with what's ultimately a frustrating product. Its efforts are commendable, but something that's so quick to fall apart at the seams cannot be commended in itself. 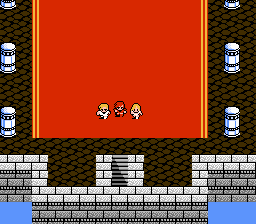