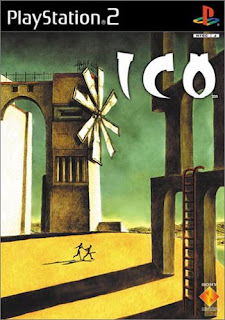 When Ico begins, we're treated to a long cinematic of tribesmen escorting a peculiar young boy with horns protruding from his head. Emerging from a forest, they approach an ancient castle first on horseback, then enter its watery underside with a small boat. Stairs are climbed, elevators are ridden and magic swords cast aside door-blocking golems until they reach their destination: a hall of sarcophaguses. As if sentient, one of the stone coffins has already foreseen their arrival, brimming to life with an ominous blue light. It opens its maw, ready to participate in the ritual.

"Do not be angry with us," says one of the guardsmen to the horned boy in a foreign tongue, "this is for the good of the village."

The boy's lack of resistance implies he's already resigned to his fate, but when a mysterious quake shakes the castle, inspiration strikes. He tugs at his restraints just as the stone flooring beneath him crumbles, breaking the sarcophagus and tumbling him out. He rises to his feet and absorbs his surroundings.

Then the player assumes control, and that's it. No control tutorial, no HUD, no signs blaring "THIS IS THE WAY OUT!". We're simply left to figure out what to do with this horned boy in the enigmatic castle.

Having first played Ico's spiritual successor (the masterpiece Shadow of the Colossus) many years before, this came as something of a shock. For all the similarities in tone and visuals, Shadow of the Colossus gives you a purpose, a destination and a couple weapons by the end of the first cinematic. In Ico, we have nothing, and so we are left as confused and aimless as the horned boy we control.

All in part to designer Fumito Ueda, perhaps gaming's most humble auteur. In subscribing to "subtracted game design", Ueda's sense of granting immersion remains unchallenged in this industry. The elements of story, color and sound are tantalizingly minimized, beating just beneath the surface of a deceptively simple game. The world of Ico is outwardly defined by simple puzzles and a simple story, yet it's how the game is constructed around that captivates us.

Take what happens after the aforementioned beginning, when Ico, the horned boy, rescues another child in captivity: an older girl with otherworldly snow-white skin wearing wispy clothes. The girl, Yorda, also speaks a foreign language, but as shown by subtitles, it's one entirely different from Ico's. It's only by linking hands do they recognize a mutual goal: to escape. 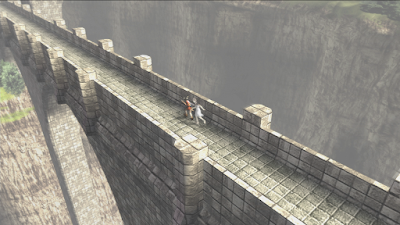 So sets the contextual stage for Ico. In navigating the castle, Ico and Yorda are in consistent physical contact, as they cannot escape without the other despite their respective weaknesses. Note how this very fact allows Ico to subvert typical gaming tropes; for instance, take how the game handles combat. There's no elaborate combo system or leveling-up, for despite having horns, Ico is no different from any other boy. The only means he has in fending off the shadow men that chase the pair around is picking up the nearest torch or sword and swinging away. What would be shallow and repetitive in any other game complements the world Ico builds.

But the game's vision never obstructs the actual gameplay, as seen in the case of Yorda. As only she can magically open the idol gates strewn about the castle, her frailty doesn't override her importance. But she's still left vulnerable most times, and as escort missions are often frowned upon in games (typically in their being slow and how often your partners get lost), it can be easy to dismiss Ico as being basically just one big fat embodiment of that unpopular trope. Yet Yorda never feels like a burden: the essential call button pans the camera over to her in times of progression or in frantic attempts to spot her when the shadow men attack. But as she's still too weak to swim and climb ropes, you can't rely on that button forever.

Guided by meticulous design, such subtle clues beg the player further into Ico's embrace. Growing so accustomed to its spare color palette--gray, black, white, and brown--we gasp when we see the first traces of green grass. The foreboding nightmare that is the shadow men theme makes us shiver at how subdued it is. We wonder if we've seen Yorda's powers somewhere before. 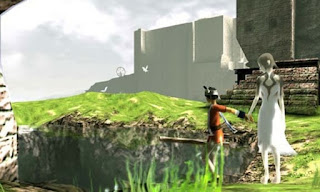 It goes without saying that Ico is an acquired taste. We could say the game gives as much as the player wants, but wouldn't the game's presentation be more active if that were the case? It's because Ico is so sparse in detail that we're given no choice but to analyze everything going on around the pair. If Shadow of the Colossus balanced thrill, immersion and pathos, then Ico juggles only the last two while honing in on something resembling critical thinking.

Shadow of the Colossus evokes such thoughts too, mind, but consider how that game largely consists of tragedy while Ico follows all the beats of a fairy tale. There's an evil queen, acts of love and companionship that save the day, and a nebulous happy ending. What's amazing about Ico is the density packed into these wafer-thin concepts; the queen's plot, for instance, isn't so uncommon in the realm of fiction. Instead, it's how this ill-fated goal is nearly achieved that reveals such a poignant darkness. It's something not explicitly told, but instead shown in a chilling pre-final battle sequence. All I'll say is that a second playthrough will require much pity unto the shadow "men".

But can a game like this have replay value? Seeing as how much extensive analysis has been performed onto the game, I can only conclude that what I've discovered in Ico will continue to branch off and grow in ways I never imagined. Much as it saddened me at times, such a thought excites me to return to the castle at some point and further scrutinize.


And to listen, too. The use of music in Ico is sparse too, but shown above is the game's single point of solace: Heal, which plays whenever Ico and Yorda rest upon the save benches. True to its purpose, it is the faintest of lullabies, free from the darkness and utter isolation the rest of the game's chilling soundtrack provides.

I bring the subject of replay up considering I get the feeling my opinion on Ico is not wholly complete. At the moment, I don't think it's quite the masterpiece Shadow of the Colossus is. That Ico compels me to dig beneath its simple surface is a wonderful feat of game design, yet its successor is such a leap in not just gameplay and sound, but in areas Ico never dared to cross (exploration, for one thing). Yet that I'm compelled to dig even further begs the question if that leap is so big after all.

Ico remains one of the most celebrated examples of art in gaming for a reason, one that I'm glad to have enjoyed on its PS3 remaster (as opposed to allowing the dreary NA PS2 boxart to grace my household, which just...well, just look at the contemptible thing). In an age where gritty games have already lost their luster, how amazing it is that Ueda's vision still strikes home fourteen years later. Here's to hoping The Last Guardian finally comes out next year. 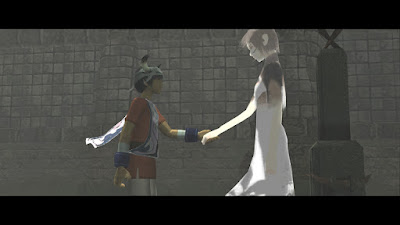